We connect with a lot of parents and clients who are doing great work eliminating toxic chemicals from their homes.  They want to do even more, but they don’t know how – and that’s why they’re working with us.  We advocate and implement ozone technology as a Toxic-Free Cleaning option.
The cornerstone of this system is using liquid (or aqueous) ozone to replace chemical disinfectants.  Disinfectants are #1 on our list of 10 Most Toxic, so that’s a great place to start!  Aqueous, or liquid ozone is perhaps the most misunderstood and maligned technology that we utilize, largely because of misunderstandings about ozone in general.  Therefore, it has become the subject of undue concern.

To set the record straight, we’ve compiled a list of FAQs that we’ve received and answered for clients.

1.  How safe is liquid ozone?
Liquid ozone is in fact a strong oxidizer.  However, this does not mean that it is corrosive or combustible in the aqueous form (i.e. a solution of water).  In residential and commercial cleaning applications it is completely safe and won’t harm bare skin.  In fact, it may help to kill germs that your hands may have contacted during the cleaning process.  Therefore, you don’t need to wear personal protective equipment like gloves as you would with harsh, chemical-based cleaning solutions.

The concern with liquid ozone tends to be around it off-gassing and becoming gaseous which dissolved at proper levels and sprayed at safe presures won’t do (see #5 below).  That being said, nobody has ever died of liquid ozone exposure, whereas every day someone dies from household chemical exposure.  In fact, cleaning staff with asthma using our product say their breathing is perfect after working with it for 8 hours, contrary to the effect chemicals had on their breathing by the end of a shift.

No.  There is much confusion between liquid ozone and atmospheric ozone.  However, high-atmospheric (gaseous) ozone concentrations are bad for asthma and allergy suffers.  It can contribute to those Code Red days which the weatherman warns us about.  Atmospheric ozone is created by Mother Nature to try to break down air pollutants like NOX, VOCs, dust and allergens.  So on those Code Red days, more ozone is being produced naturally because there are more VOCs in the air.  Ozone gas is an indicator that there are other atmospheric contaminants that also affect asthma and allergy sufferers like VOCs, nitrogen oxides, dust and pollen.  Being quicker and easier to measure than the thousands of air pollutants, ozone gets a bad rap. 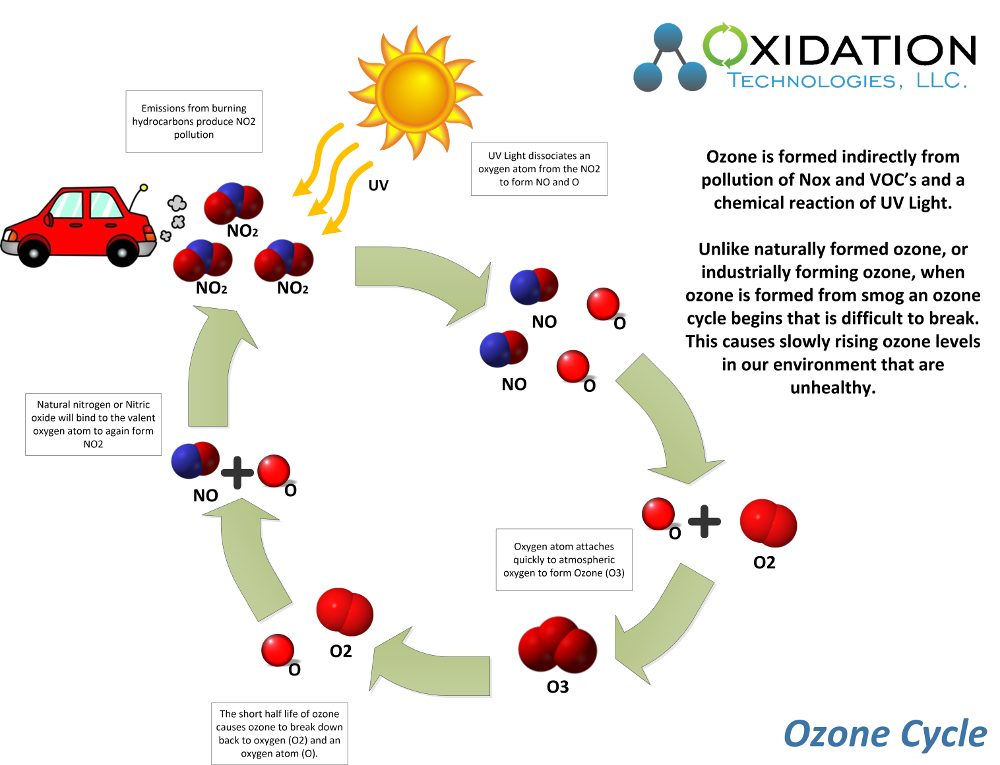 Man-made atmospheric ozone an also be produced by air purifying generators and filters to deodorize and disinfect rooms like operating rooms, hotel rooms, and even weather-damaged homes.  Allergy and asthma sufferers should indeed be wary of such high concentration applications.

Liquid ozone cleaners,  are different than atmospheric ozone generators. They create ozone gas infused into a watermedia, as opposed to the air.  Since ozone is an unstable molecule, it reverts to oxygen faster than the water evaporates without off-gassing.  In this way liquid ozone is a safe and preferential alternative to chemical disinfectants, many of which are themselves asthma triggers.
3.  How does liquid ozone work? 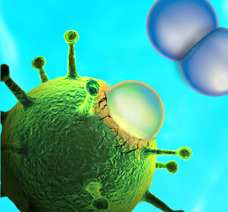 Ozone is a molecule of three oxygen atoms (O3) that is not stable and will breakdown quickly and form radicals that have a high oxidation potential, or redox.  This is what makes it a strong oxidizer and disinfectant.  During the oxidation, only one oxygen atom is used for the chemical reaction forming with hydrogen into OH-radicals.  Harmless to people, the ozone quickly attacks and eliminates contaminants it comes in which it contacts.  The oxidization reacts with the cell walls of bacteria and viruses the same way hydrogen peroxide and iodine do, causing cell poration of the microbe, which leads to its death.  The oxidation also removes electrons of molecules, eventually rendering them inert.  In this way O3 kills the bacteria that cause odors, viruses that cause illness, as well as breaks down bio matter on surfaces that provide the food for microbes.

4.  How much ozone do liquid ozone cleaning solutions contain?

It varies from application and manufacturer.  It can be is as high as 5ppm or more for high-volume industrial settings but is normally around 2-3 ppm for most cleaning and sanitation applications.  We keep ozone levels in water to reasonable levels to prevent off-gassing as ozone in air is regulated by OSHA.
5.  How long does ozone last?
Ozone in aqueous form has a roughly 15 minute half-life (dependent upon temperature and water quality).  While is is obviously NOT radioactive as “half-life” may seem to imply, it is used because of ozone’s rapid degradation.  In 15 minutes half its solution has lost potency, at which point it is a better cleaning solution than disinfectant for the next few hours.
6.  What residues will liquid ozone leave after it dries?
Contrary to chlorine, which always leaves an oxidation or disinfection byproduct, ozone simply will revert back to oxygen.
7.  How strong is liquid ozone?
O3 is is often compared to bleach and other chlorinated products as they are used in many of the same disinfection applications.  When used as such ozone has proven to be 50% stronger and 3000x faster than bleach.

In regulated cleaning applications, EPA guidelines direct us toward disinfection with chlorine and ozone.  For example, disinfecting with 1 ppm chlorine at a water temperature of 59°F and a pH of 7 requires a dwell time of 75 minutes. The disinfection efficiency achieved will be 99.9 percent.  Assuming the same temperature and pH, a concentration of 1 mg/l of liquid ozone water achieves a disinfection efficiency of 99.9% in only 57 seconds.  For this example giardia is the parasite used in the water sample because it is one of the most difficult microorganisms to kill.

8.  How is liquid ozone produced?

9.  What other applications does ozone have?

Ozone has many applications on the home and commercially.  We covered cleaning using liquid ozone quite thoroughly by now.  Ozone generators can be made for water treatment plants and are in use all over the world.  There are applications for it in laundry and dish washing, but mostly in commercial or industrial settings.

Ozone generators have been used on both public and private pools as a means of disinfecting pool water.  Similarly, some aquariums use it to keep water fresh and germ-free.  Another important application is air purification.  As an oxidizer it attacks the bacteria at the cell level, killing them and their aerobic activity, which is what causes odors and areas of potential for infection.

The SB100 Ozone Spray bottle uses an electrolytic ozone generating cell to produce ozone in water as the bottle is used. No chance of low ozone levels as ozone is produced real-time while used. Great for small scale cleaning applications

For larger scale applications an ozone water system can be used. Ozone levels in water of 3-5 ppm can be created easily at water flow-rates from 3 – 300 GPM.

Should you have questions about cleaning and disinfecting with liquid ozone, please call our office.

55 thoughts on “Cleaning with Liquid Ozone: What you need to know”