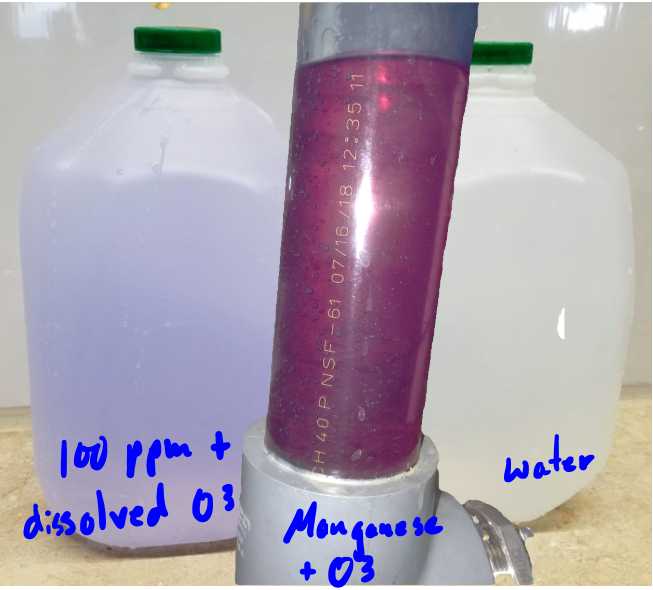 Our lab was doing some ozone exposure testing on a water sample and I noticed a beautiful magenta color developing. Toward the end of the exposure test, the foam in the water column began to take on a pinkish color. When the ozone was turned off, the foam quickly reduced to the magenta colored liquid you see in the picture. After a few minutes, it became colorless again. Intrigued, I asked why it changed colors, and learned that it had to do with Manganese Dioxide. I did some further research, and learned that Manganese has a number of oxidation states from +2 to +7. Manganese is often found dissolved in water. As such it can not be filtered from the water. Ozone will oxidize the manganese to manganese dioxide MnO2 which is particulate and can then be filtered from water. Further ozone exposure as was done in the water sample eventually forms soluble permanganate MnO4- which has a purplish color.  See our water treatment equipment for removal of iron and manganese from well water.

Last year we did some lab testing that required water with a dissolved ozone concentration over 100 ppm. https://www.oxidationtech.com/blog/the-color-of-ozone/. Here we could distinctly see the bluish color of ozone. The intense colors only hint at the power of ozone even in much lower concentrations.

For further study and research into water treatment and manganese removal, see the International Ozone Association website and links to research.