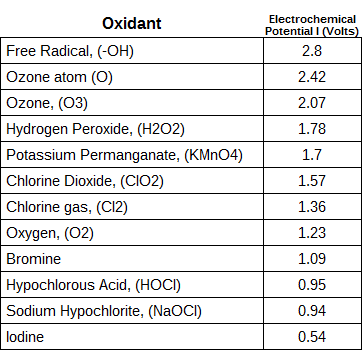 Oxidation Potential, otherwise reffered to as redox potential, is the measurement of the tendancy of a chemical species to acquire electrons, ane be reduced.  Oxidation Potential is measured as a voltage.  Greater oxidation potential indicates a greater tendancy to be reduced, and thereby create an electron exchange with other chemicla species.

Because of the high oxidation potetnail the oxygen molecule has a high capacity to react with many compounds not easiy oxidized by other chemicals.  This potential is especially important reactions with some inorganic species such as FE+2  and I-.  However, in many cases there is no explicit electron transfer, but rather an oxygen transfer from the ozone molecule to the other compound.

Example of ion exchange oxidation of ozone and iron:

Example of oxygen atom exchange oxidation of ozone and iron:

Both reactions can occur with organic and inorganic compounds.  This is just one simple example of ozone oxication reactions.

3 thoughts on “Oxidation potential of Ozone”